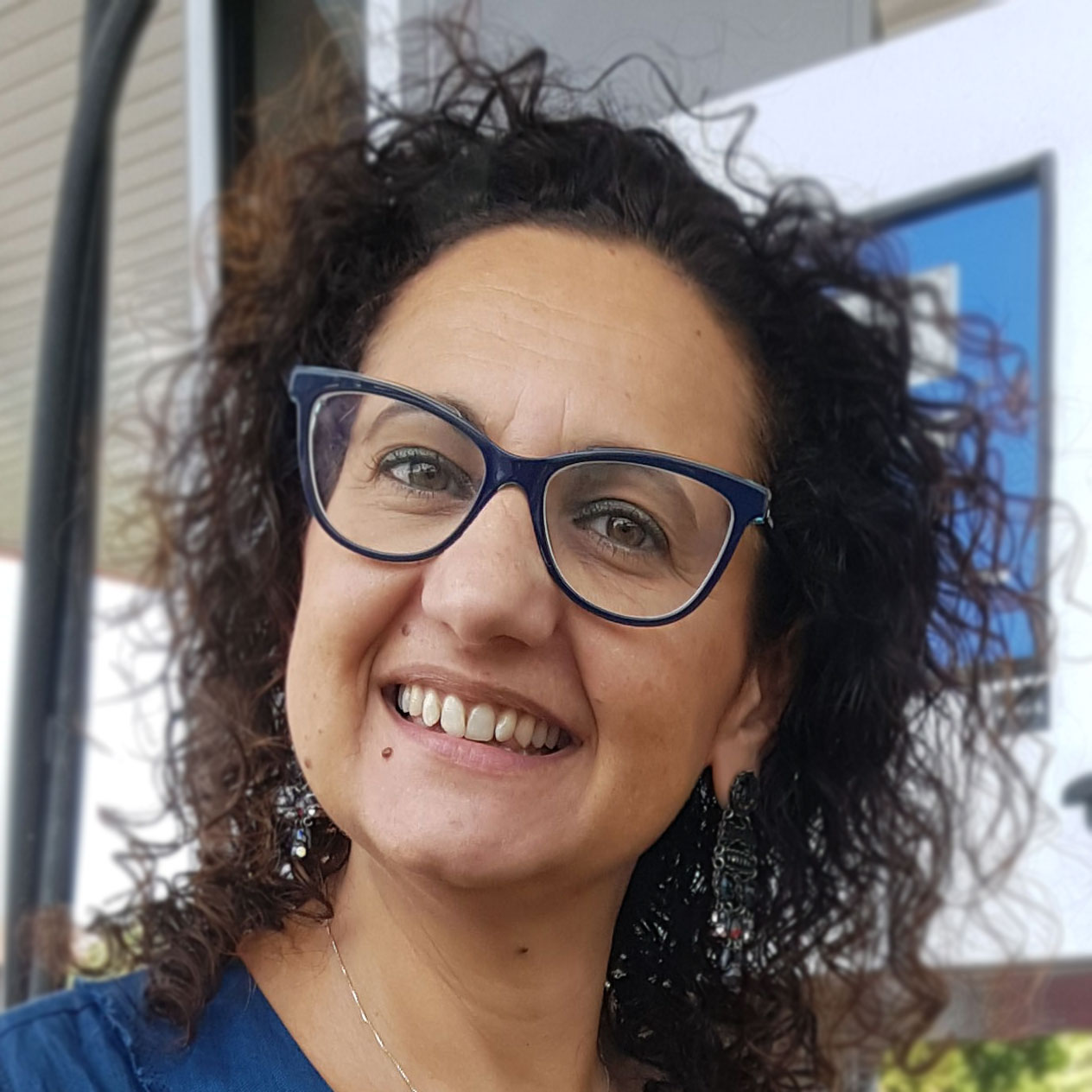 Graduated in Physics with full marks and laude in 1993 at the University of Catania with a thesis on “Archaeometry. New perspectives to archaeological pottery characterisation” based on the experimental research performed during the Erasmus Project at the University of Bordeaux (France). In this last academy, she obtained her post-graduate degree (DESS, Diplôme d'études supérieures spécialisées) in Physical Methods in Archaeology and Museography with distinction. After a scholarship from INFM, she received a PhD in Physics from the University of Catania in 1999. Post-doc scholarship from CNR and research grant from University of Catania, she is part of the staff of the University of Catania from 2006 as a Researcher and since 2015 as an Associate Professor of Physics Applied to Cultural Heritage, Environment, Biology and Medicine. She teaches Archaeometry, Image analysis and fundamentals of dosimetry to the students of Master Degree in Physics, Applied Physics to Specialisation Schools, Bachelor’s and Master’s Degree in Medicine. She is a member of the Teaching Board of the PhD Studies for Cultural Heritage and Production at the Department of Humanities.

She is the Director of the School of Specialization in Medical Physics for the four-year period 2018/2022 and she is the delegate of the Director of the Department of Physics and Astronomy “Ettore Majorana” of the relations with the School of Medicine and Safety. Coordinator of the course in Physics Applied to Cultural Heritage and Biomedicine of the Master's Degree in Physics, she was the head of the Counselling group for outside prescribed time students in the project "The University helps me" (2014- 2018). She was a member of the Funds and Building Planning (2009-2012) and of the Internationalization (2010-2012) Committees of the Faculty of Mathematical, Physical and Natural Sciences, she was elected to the Board of the Department and performed the role of Secretary of the Council (2010 -2012).

Anna M. Gueli is the scientific manager of the PH3DRA (PHysics for Dating Diagnostics Dosimetry Research and Applications) Laboratories and coordinates the teaching, research and third party activities within interdisciplinary and multidisciplinary programs mainly in the field of Cultural Heritage and Medicine. Charged of research at the Catania’s Section of the National Institute of Nuclear Physics (INFN), she is the local scientific manager of the Cultural Heritage Network CHNet, node of the European Research Infrastructure for Heritage Science E-RHIS.

She was Chercheur Associé of the European program GRUNDTVIG Adult Education Program (1999-2003) and Professeur Invitée à temps plein of the University of Bordeaux (2007-2008). She coordinated the activities of Italian researchers within the European Research Group GdRE-TCA “Ceramic Building Materials and new dating methods”. Elected member of the Executive Council of the Italian Association of Archaeometry (AIAr) covering the role of General Secretary (2008-2014) and Treasurer (2009-2011). Member of the Colour Group of the Italian Colour Association, she has been a member of the Scientific Committee and of the Editorial Committee since 2008.

Professor Gueli is the Catania’s University Delegate in the Permanent Thematic Working Group of the Regional Strategy of the Innovation for the Intelligent Specialization in the area of "Tourism, cultural heritage, culture" and in the National Technological Cluster Project TICHE - Technological Innovation in Cultural Heritage.

Associate Professor of SSD FIS/07 Applied Physics (Cultural Heritage, Environment, Biology And Medicine) – since 1.10.2015
Director of the School of Specialization in Medical Physics – since 5.10.2018
Scientific director of the PH3DRA (PHysics for Dating Diagnostics Dosimetry Research and Applications) Laboratories of the Department of Physics and Astronomy "Ettore Majorana" of the University of Catania – since 2015
Charged of research at the Catania’s Section of the National Institute of Nuclear Physics (INFN) and local scientific manager of the Cultural Heritage Network CHNet, node of the European Research Infrastructure for Heritage Science E-RHIS  – since 2015

Professor Gueli is the supervisor of numerous theses for the achievement of Bachelor’s degree and Master’s degree as well as tutor for PhD and specialization theses.

Professor Gueli is the author of about 100 publications in international peer review journals. The complete list can be consulted in the official IRIS database of the scientific products of the University of Catania: "IRIS-UniCT Catalogo - Anna Maria Gueli" and in the Bibliographic Databases indicated in the following table using the shown Author ID:

A selection of 20 articles representative of Prof. Gueli's career is as follows:

The research activity has always been conducted in the field of applied experimental physics with an interdisciplinary and multidisciplinary approach on topics that follows two main axes.

The first axis concerns methodological research in the field of Cultural Heritage with particular attention to the diagnostics of paintings and polychrome works for their conservation, protection, restoration and promotion.

The main topics of interest in this area are:

The skills acquired in the field of TL and OSL dating have determined the development of the research line concerning the dating of sediments and geological stratigraphy using the quartz and feldspar fractions extracted from them as well as the development of methodologies for dating carbonates by Electron Spin Resonance (ESR) methodology.

Thanks to the experience gained in the field of colorimetry an independent research line aimed to the colour specification of materials of interest in various fields was developed The main applications concern areas such as food, dental materials, digital images and printing processes.

The second axis is developed in the field of Medical Physics and, above all, in the dosimetry of ionizing radiations to perform quality control programs of diagnostic systems and instrumentation used for therapy. In the field of radiotherapy the dose measurements are aimed to verify the treatment plans for external beams, brachytherapy and radiometabolic treatments. The research activity in this field concerns methodological and applicative studies based mainly on dosimetry by luminescent crystals, both TLD (ThermoLuminescent Dosimeters) and OSLD (Optically Stimulated Luminescence Dosimeters), and radiochromic films of the Gafchromic® type.

The results of the research activity are constantly presented at congresses and events also as invited speaker.

Roles in committees and councils

Secretary of the School of Specialization in Audiology and Phoniatrics (since 2018).

Teaching Board Member of the PhD in Studies for Cultural Heritage and Production at the Department of Humanities (since 2017).

Member of the Quality Assurance Commission of the Bachelor’s Degree in Medical Radiology Techniques for Imaging and Radiotherapy (since 2017).

Secretary of the Council of the Master’s Degree in Medicine and Surgery (from 2016).

Member of the Quality Assurance Commission of the Master’s Degree in Medicine and Surgery (since 2016).

Member of the Teaching Commission of the Bachelor’s Degree in Medical Radiology Techniques for Imaging and Radiotherapy (since 2015).

Professor Gueli is involved in multiple dissemination activities, through the organisation of seminars, meeting and interactive laboratories for schools and professional of various areas.

From many years she is also involved in projects of “Alternanza Scuola–Lavoro”, Technological Transfer activities, agreements with national and international institutions and services for companies and private citizens. Some of the activities of the last 5 years are listed below.

Member of the Regional Committee for the "Asimov Prize for Scientific Dissemination Publishing" (since 2018).

Person in charge for the UniCT and the INFN CHNet network of the activity “How much physics is there in a painting” during the European Researchers 'Night 2018 SHARPER SHAring, Researchers' Passion for Evidences and Resilience, Monastero dei Benedettini, Catania, 28 September 2018.

"From the Stars to the Particles", meeting - debate organized by the Sicilian Center for Nuclear Physics and Structure of Matter (CSFNSM) under the MIUR program "The female students want to count", 8 March 2016.

“The colour of the world and the world of colours”, Liceo Scientifico Principe Umberto, Catania since S.Y 2016/2017

Member of the Organizing Committee of the 5th Training Camp of the European Research Infrastructure for Heritage Science, E-RHIS, "Innovation and Archeology: the Apulian archaeological site of Monte Sannace and its finds at the Gioia del Colle museum", National Archaeological Museum of Gioia del Colle (BA), 30 September - 6 October 2018

Coordinator of the Organizing Committee of the event "Physicist and Medical doctor: Pills of daily experience", Catania, 28 June 2017

Member of the Organizing Committee of the Conference on ancient and modern mortars AMMC 2013, Florence, 7-8 February 2013