Hadrontherapy: from the conventional approach to the new frontiers of laser-driven

Cancer treatment with particle beams (hadrontherapy) is nowadays a quite mature technology and more than 200.000 have been treated with this modality in the word since the first treatment in 1954.

In Italy the first protontherapy facility (CATANA or Centro di AdroTerapia ed Applicazioni Nucleari Avanzate) was born in 2002 from a collaboration between the Italian Institute for Nuclear Physics (INFN-LNS), the Physics and Astronomy Department and the Polyclinic of Catania University and the Sicilian Center for Nuclear and Matter Science Studies.

The CATANA protontherapy beamline is installed in one of the experimental rooms of the INFN-LNS and is dedicated to the treatment of ocular melanomas and superficial pathologies that can take advantage from the proton irradiation. At today, more than 400 patients have been treated at CATANA.

Hadrontherapy arguably represents an appealing prospective for future applications of the acceleration from high-power laser-matter interaction. For this reason, the new ELIMED beamline and activities will be presented. ELIMED (ELI-Beamlines MEDical and multidisciplinary applications) will be the first world Uesers’ open beamline dedicated to the transport and application of laser-accelerated ion beams. It was designed and realized at INFN-LNS and recently installed at ELI-Beamlines (Prague, CZ) in one of the biggest world laser-facility. ELIMED will be an exceptional testbench for the studies of the properties of the new laser-generated beams.

To validate the feasibility of clinically sound laser-driven beams, preliminary in-vitro radiobiology experiments are necessary. This is because cellular response to ionizing radiation is profoundly influenced by the spatio-temporal distribution of DNA lesions along radiation tracks. Hence, the unprecedented physical regimes that can be achieved by such beams warrant verification that biological effectiveness at tumour cell killing is at least the same as that offered by conventionally accelerated beams, as most recent literature seem to confirm. Furthermore, the recent findings that conventionally accelerated short-pulsed, ultra-high dose rate (exceeding 40 Gy/s) photon and electron irradiation may lead to an increased sparing of normal tissue (paving the way to the so-called FLASH radiotherapy), adds interest to test such a behavior also with optically accelerated particles, where such physical features are greatly magnified. The first radiobiology experiment at ELIMED is expected at the beginning of 2020, after a preliminary phase where all dosimetric devices will be characterized and the absolute dosimetry protocol defined.

All the physical and biological implications of this new field will be presented and discussed. 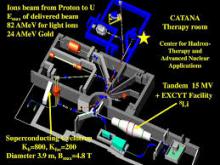 Dr G. A. P. Cirrone is senior researcher at INFN - Laboratori Nazionali del Sud. He is a medical physicist, expert in the absolute and relative dosimetry of photon, electron and proton beams. He is member of the Geant4 Monte Carlo Collaboration and developer of Monte Carlo applications for medical physics applications. He is also expert of particle acceleration, transport, diagnostic and dosimetry of ion beams generated in high-power laser-matter interaction.