The analysis of ancient alloys can give useful information to archaeologists, numismatics and conservators. In fact the knowledge of the chemical composition of the alloy allows to study the techniques used for manufacturing the artefacts; the determination of the trace elements, especially in objects realised with native metals, helps to determine the provenance of the raw materials and, consequently, to know the trade routes used in the past for the exchange of goods; finally, the study of the noble metals content in metallic artefacts - i.e. coins - allows to obtain information about the economic evolution of a region and on the presence of inflation processes occurred during the time.

However the analysis of metals should be performed taking into account the presence of effects that produce meaningful in homogeneities in their surface: in fact, the corrosion and oxidation patinas (especially in the copper based alloys), the manufacturing techniques and the associated metallurgical processes occurring during the alloy realisation, the presence of coverings enriched with noble metals (gilded or silvered objects) and a not appropriate use of the conservation procedures, can produce variation of the surface composition until a depth of 200 microns.

Even if a destructive analytical approach allows to obtain accurate and detailed quantitative information about the composition and structure of the alloy under investigation, the use non destructive techniques is preferable when a large number of artefacts must be analysed or when the analysis deals with objects that must be preserved for their great historical and artistic value.

However the most used non destructive techniques are surface techniques (PIXE, XRF) or they are strongly influenced by the surface composition (PAA, NAA).

Recently, at the LANDIS laboratory, in collaboration with the CNR-IBAM, a protocol of measurement based on a combined us of non destructive techniques has been developed in order to obtain accurate quantitative information about an ancient alloy composition. In particular the PIXE and XRF techniques are used for the surface characterisation of a metallic artefact while the new DPAA (Deep Proton Activation Analysis) is used to determine the composition of the interior of the alloy, minimizing the surface contribution.

THE ANALYSIS OF THE INTERIOR OF AN ANCIENT ALLOY

Recently a new innovative method, based on the activation proton technique, that allows to perform the quantitative analysis of the interior of an ancient alloy minimizing the contribution of the in homogeneities of the surface was developed at the LANDIS laboratory.

Considering that this distribution presents a maximum at an energy of 10-12 MeV and selecting the appropriate incident energy of the protons beam, it is possible to confine the radioisotope production in a defined region in the interior of the coins. In the case of the DPAA technique, the incident energy is about 20 MeV and the analysed layer of a ancient alloy (i.e. bronze) is limited to a region between 350 microns to 650 microns, enough to overpass the corrosion/oxidation layer typically present in the surface of ancient artefacts

The DPAA technique is particularly useful for the analysis of artefacts with enriched patinas in noble metals. The technique is largely used for the determination of the silver content in the interior of the above mentioned Roman folles. 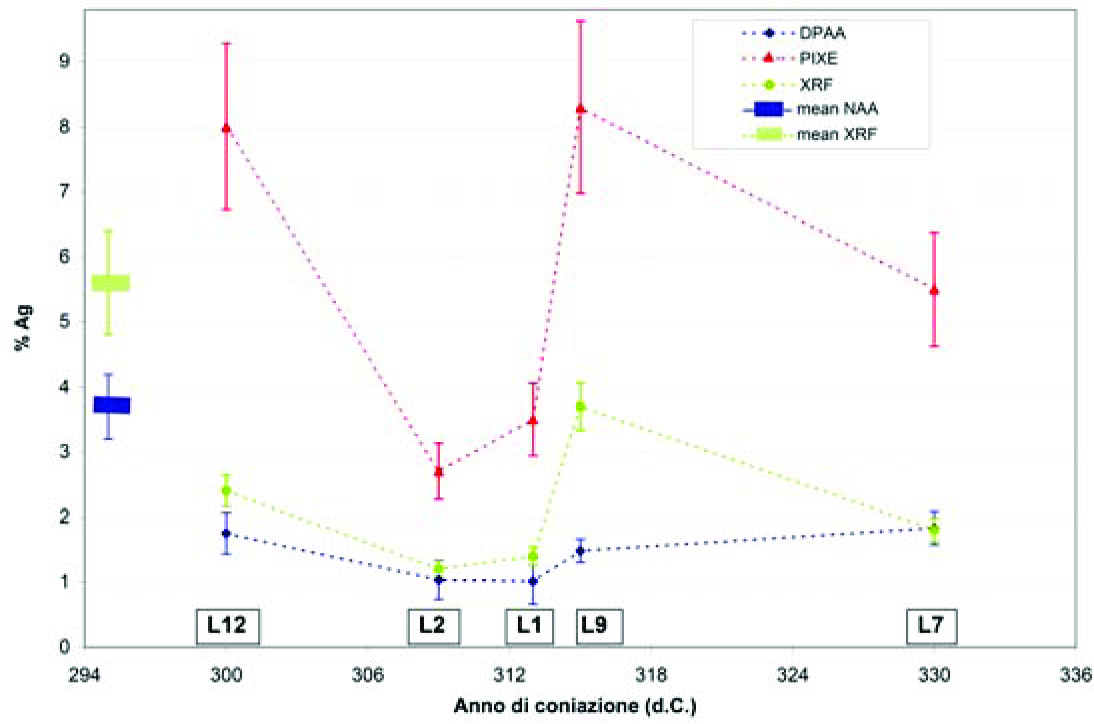 Figure 2 shows the comparison of the surface measurements (PIXE and XRF) of the silver composing the folles and the silver contained in the interior of the alloy. It is evident that the combined use of the three non destructive techniques allow to obtain detailed quantitative information about the alloy composition and structure.

In the present work the combined use of new non destructive methods applied for the quantitative determination of the composition of ancient alloys was described and discussed.

In particular it was evidenced how the use of the portable PIXE-alpha technique is suited for the characterisation of the surface patina (the case of silvered patinas in Roman coins has been discussed); the combined use of PIXE-alpha and XRF allows to determine the thickens of such a patina. Finally, the application of the innovative DPAA allowed, for the first time, the non destructive characterisation of the interior of the ancient alloys minimizing the in homogeneities often present in the surface of ancient artefacts.