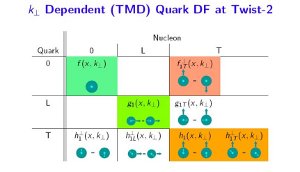 Understanding the structure of the nucleon from the underlying theory of strong interaction in terms of quark and gluon degrees of freedom is a fundamental and challenging task in physics. Present knowledge about the spin structure of the nucleon, described by Parton Distribution Functions, comes mainly from polarized deep inelastic scattering (DIS). The polarization of the individual flavours and anti-flavours were mainly studied by fitting the inclusive DIS data. Howe [Figura_JLAB12] ver, inclusive DIS is sensitive to only the squared charges of the partons, and requires additional assumptions (e.g. an SU(3) symmetric sea), which lead to model dependence. SIDIS (Semi-Inclusive DIS) studies, for which a hadron is detected in coincidence with the scattered lepton allows “flavour-tagging”, and give access to the transverse momentum distributions (TMD) of quarks, not accessible in inclusive DIS, as well as to the azimuthal distributions of final state particles, and therefore to single- and double-spin asymmetries and to crucial informations on the orbital motion of quarks. The Sivers and Boer-Mulders TMD (f1T and h1 in the fig. 1) are non-zero only when initial or final state interactions cause an interference between different helicity states, and require non-zero orbital momentum. Their measurement is of paramount importance, providing a step towards the solution of the so-called nucleon spin-crisis. The Jefferson Lab (JLAB), in Virginia, offer the possibility to arrange experiments for the measurement of PDFs, transversity and single and double-spin asymmetry via SIDIS on nuclear targets; in particular the 12 GeV Upgrade of the the Laboratory will be a unique opportunity for the nuclear physics community to expand its reaches into unknown scientific areas. JLAB12 Catania group is currently involved in the development of the multiple GEM tracker detector for the HALL A equipment enhancement, including the mechanical design and commissioning, the hardware testing and build-up and the computer simulation of realistic test-cases. Moreover, the analysis of data taken during present experiments at JLAB with a 6 GeV electron beam is scheduled for the second half of 2009.