The use of muons from the secondary cosmic radiation has found applications in many different fields. One of the most important examples is the muon tomography, a technique aimed at the study of the inner structure of large volumes (mountains and volcanos, buildings, containers…) exploiting the absorption or the deflection of the cosmic muons passing through them.

Since many years several researchers at the DFA are involved in activities related to different applications of the secondary cosmic radiation:

• The MUON PORTAL: Muon tomography of containers for contrasting the smuggling of illicit fissile material

The research activity related to the muon container tomography has been carried out within the project PON Research and Competitiveness 2007-2013 "Portal for the contrast of the nuclear fissile material smuggling" which involved the Department of Physics and Astronomy (University of Catania), the INAF - Astrophysical Observatory, the ST-Microelectronics, the Meridionale Impianti and the Insirio. The Project aimed at the development, construction and use of an apparatus - "portal" – able to detect illicit fissile materials hidden inside containers, exploiting the phenomenon of cosmic muons deflection when crossing high atomic number materials. Through the development of innovative technologies, ranging from the production of photosensors, to electronics, to simulation techniques and algorithms for graphic visualization of images, a detector consisting of 8 planes was built, each with an area of ​​about 18 square meters, such as to be able to host a container and inspect it.

After the R&D phase and construction of the Muon Portal detector, a first set of commissioning measurements, with a few dm3 lead block inserted in the inner volume of the detector, was undertaken, to align the detection planes and provide a successful first check of the tomographic image reconstruction.

Left: A schematic view of the detector layout for container inspection by muon tomography.; Right: 2D tomographic image of a few dm3 lead block inserted in the inner volume of the detector.

• Muon radiography of summit craters of the Etna volcano:

The research activity about the muon radiography of summit craters of the Etna volcano is conducted by the MEV (Muography of Etna Volcano) collaboration funded by MIUR with funds FIR2014 (Future in Research), aiming at the development of a muon telescope designed for muography of the Etna volcano. In particular, one of the active craters in the summit area of ​​the volcano, the North-East crater, was the target of this experiment. A muon tracking telescope with high angular resolution was built and installed, during the test phase in 2017, at the INGV facility located in Nicolosi, a village 13 km far from Catania. This phase lasted about 110 days and involved the muography of Monti Rossi, an extinct volcanic cone, from a distance of about 900 m.

After this first successful test, the telescope was moved close to the Etna North-East crater, at about 3100 m a.s.l. and acquired data for several months in 2017, 2018 and 2019, allowing to “photograph” the interior of the North-East crater before and after the roof collapsed.

Recently, an agreement between the University of Catania, the University of Tokyo, the Wigner Research Center for Physics, the Hungarian Academy of Science ("Wigner") and the NEC Corporation was signed in order to jointly develop a new tomographic monitoring system.

Left: The muon transmission measured through the Monti Rossi during the test phase. Right: The MEV telescope installed on the slope of the Etna North-East crater, at about 3100 m a.s.l.

Muons may  provide a way to monitor alignment and possible long term deformations of large structures, such as historical buildings or other large civil structures. The basic idea behind this possibility is to employ a set of position-sensitive detectors fixed to different parts of the structure and reconstruct the muon tracks passing through them. Any misalignment between the positions measured in all detection planes with respect to the original alignment condition could signal a mechanical shift of a part of the structure with respect to other parts. Variations of this strategy consider a single good tracking muon detector fixed to part of the structure or to the ground, and one or several additional detectors – even without tracking capabilities – fixed to the part(s) of the structure being monitored, and operated in coincidence with the tracking detector. Long-lasting measurements of the angular distribution of the cosmic muons passing through the tracking telescope and one of the additional detectors may give information on possible shifts in the relative position of the two devices, thus evidencing long term instability of the structure. The next figure shows a sketch of a possible implementation of this strategy. 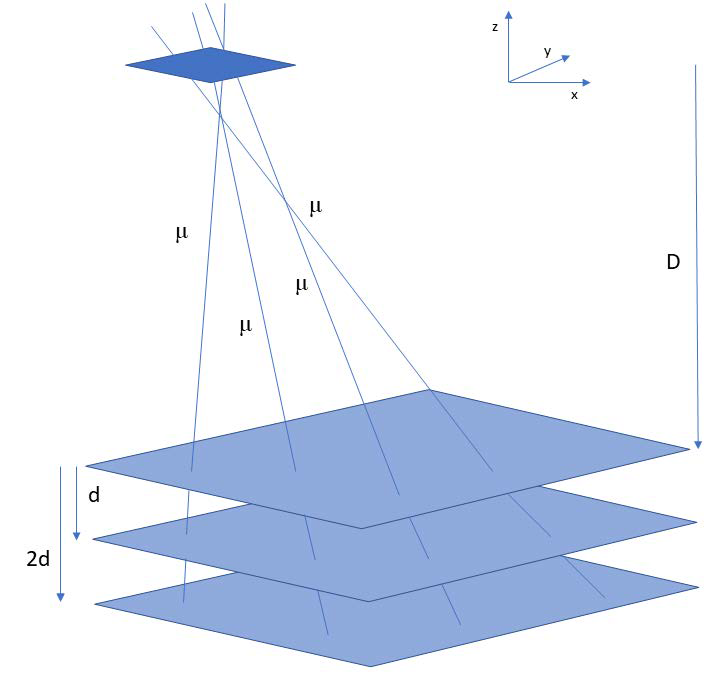 Left: Geometrical sketch illustrating the technique, with coincident muons passing through a tracking telescope made by three position-sensitive planes and one or more additional detectors located some distance apart.

This possibility is particularly useful when traditional methods, for instance based on laser alignment or metal wires stretched between various points in the structure, cannot be easily employed. This may be the case when the regions undergoing possible shifts are not optically in view due to interposed materials or being located in different floors of the building.

In this context a set of measurements was carried out with one of the EEE telescopes (https://www.dfa.unict.it/it/content/eee), located in the underground floor of the Physics Department in Catania employing a tracking telescope made of 3 MRPC detectors ), in conjunction with an additional scintillator (POLA-01 detector), based on two layers of scintillators covering a 40x60 cm2 sensitive area, which was located at the third floor of the bulding, at a vertical distance of about 15.6 m from the EEE telescope, with a large amount of material between the two detectors, due to the concrete layers separating the different floors. Preliminary results point out that, even with some limitations, it is possible to observe small shifts of the movable detector with respect to the tracking device, of the order of a few mm, in a reasonable data taking period (several weeks), especially if some optimization may be achieved concerning the location of the two detectors.