Science education at the high-school or undergraduate level may receive strong support from educational projects involving students and teachers in a common research work, with the possibility to follow many of the basic steps in a real scientific investigation. They include the basic understanding of the physics items involved in the project, the planning of the experiment, the construction of the apparatus, its use for physical measurements, the data analysis and interpretation, and, finally, the sharing and dissemination of the scientific results.
In recent years, examples of collaborations which involve high schools, university and research centers in projects concerning cosmic ray physics have become more and more numerous all over the world. The main reason lies in the evident educational aspects that characterize experiments for the detection of cosmic rays; these activities offer to school teachers and associated groups of students the possibility to be trained in the world of experimental high energy physics, since not only may they learn the basics of cosmic ray physics, but also stay in touch with several aspects of a real research activity.
Over the past years many educational experiments in cosmic ray physics have been carried out in our Department, employing simple Geiger counters and small scintillation detectors. Since 2006, our site joined the Extreme Energy Events (EEE) Collaboration.
The EEE Project is a joint educational and scientific initiative by Centro Fermi (Museo Storico della Fisica e Centro Studi e Ricerche Enrico Fermi), in collaboration with INFN, CERN and MIUR (the Italian Ministry of Education, University and Research). The Project has built and installed an array of cosmic ray detectors, distributed in several sites, spanning all the Italian territory. The physics research interests of the Project include the properties of the local muon flux and its dependence on planetary and solar environment, the detection of high energy extensive air showers created in the Earth atmosphere by time and orientation correlation measurements between several telescopes, and the search for possible long range correlations between far telescopes. A powerful impact on education is also envisaged by the EEE Project, which is strongly contributing to introduce a large number of school teachers and students to the problems and results of particle and astroparticle physics.
The detection technique employed by the EEE telescopes is based on three layers of Multigap Resistive Plate Chambers (MRPC), able to provide the orientation of each incoming muon, with a high efficiency and angular resolution. Each EEE telescope is composed by three Multigap Resistive Plate Chambers (MRPC)  (0.82 m x 1.58 m active area), built at CERN by high school teams under the supervision of researchers and technicians.
Several results from the EEE Project have been already published, including the study of Forbush decreases due to solar flares and the detection of extensive air showers by coincident detection of muons in different telescopes. After an initial period of construction and commissioning of the first telescopes in 2007, a coordinated data taking officially started at the end of 2014 with a three weeks Pilot Run, during which 1 billion of events were collected. Since then, the observatory has grown up in terms of number of telescopes and duty cycle. The list of the telescopes and the status of the coordinated data taking can be monitored at www.centrofermi.it/monitor. 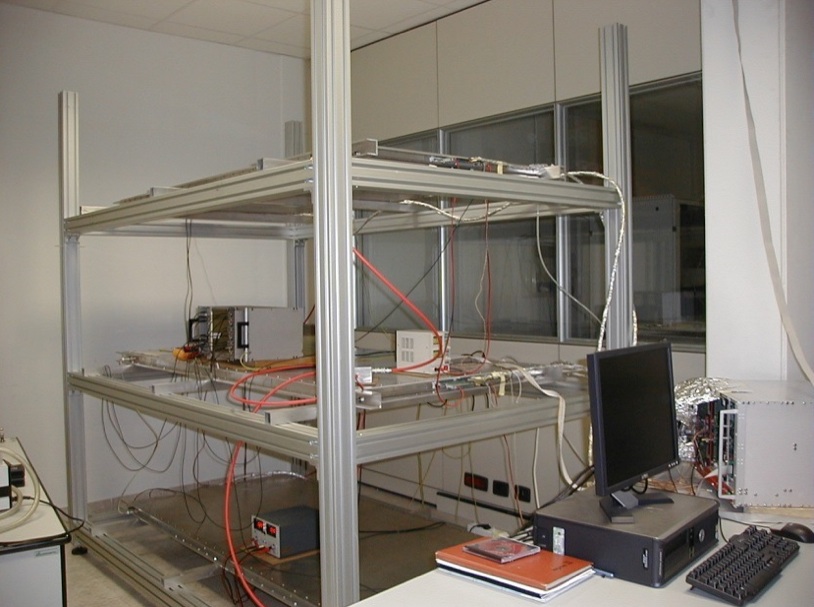 The EEE telescope installed and taking data since 2006 at the Department of Physics and Astronomy in Catania.