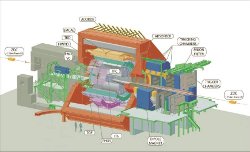 ALICE is one of the four experiments at the CERN LHC (Large Hadron Collider) which has started its activity the 10th of September 2008. It is one of the largest experiments in the world devoted to the study of the Quark-Gluon Plasma produced in ultra-relativistic heavy ion collisions (Pb–Pb), but it is also collecting data in smaller systems (pp, p–Pb and Xe-Xe) at different energies.

During the years ALICE has confirmed the nature of QGP as an almost-perfect liquid, observing the formation of hot hadronic matter at unprecedented values of temperature, density and volume. These physics results have been achieved by ALICE after only two years of Pb-Pb running and one p-Pb run, demonstrating its excellent capabilities to measure high-energy nuclear collisions at the LHC.

To improve its perfomance, ALICE is now preparing a major upgrade of its apparatus, planned for installation during the Long Shutdown 2 (LS2) of LHC in the years 2019-2020.

An up-to-date list of the results published by the ALICE Collaboration can be found at http://alice-publications.web.cern.ch/publications.

During the construction phase, the Catania team has been involved in the realization of two sub-detectors, the  silicon detector Inner Tracking System (ITS) and the Pb-scintillator sampling Electromagnetic Calorimeter (EMCal), that is a Pb-scintillator sampling calorimeter. Currently our group is involved in the upgrade of the ITS, which will be fully replaced with a new tracking detector made of layers of monolithic silicon pixels during LS2. Within such activity, our team is responsible for the electrical characterization of the Flexible Printed Circuits, very thin boards that will host the pixel chips.

Together with this experimental activity, the Catania team is deeply involved in analyses devoted to the physics of the light flavour particles to study the hot and dense matter produced at LHC.  In particular it works on the identification of resonances recostructed by their hadronic decay (especially K*(892) and φ(1020)) analyzing data for different collision systems and energies. These particles are perfect probes to characterize the hadronic phase of the collision and to have possible hints of chiral symmetry restoration phenomena.

Recently our group has recently taken part to a new analysis activity related to the measurement of nuclei and anti-nuclei production with the ALICE detector. The study of these nuclei yield and flow can give new inputs in the understanding of the hadronization processes, in which the quarks and gluons are converted into the hadrons that are seen in the detector.

The amount of data produced each year by the LHC experiments has required a complex GRID computing architecture both for the storing and physics analyses. Catania is one of the 155 Tier 2 centres in the world where copies of experimental data are stored and  specific analysis tasks are performed.